Benedikt Böhm is in the top 100 speakers of the renowned speaker agency Speakers Excellence.

Benedikt Böhm is the International Managing Director of the ski-touring outfitter DYNAFIT. This brand evolved from insolvency to the market leader since he started in 2003.

In his second life Benedikt Böhm is an extreme-mountaineer and speaker. With his catching presentations he skillfully establishes ties between the extreme world of the mountains – from the so called death zone- to the world of business. Böhm is not a risk athlete who is tired of life. At sport as well as in business life he is planning his high goals meticulously and with passion to realize those. Böhm finished his education at Universities in the USA and England but the most precious experiences for his career in management have been his endeavors in the mountains.

Böhm climbs 8000 m high mountains not only without oxygen and outside help but also extremely fast with the so called ‘Speed Style’. With this uncompromising style which focuses on speed by climbing the highest mountains is the goal to minimize the risk while being in the death zone. Böhm climbs easily and fast with almost no baggage in a non-stop-push directly from the foot of the mountain up to the peak and back in a self-made time window ( for example 17 hours at the Gasherbrum II (8.035m) or 23,5 hours at the Manaslu which is with his 8.163 m the eighth highest mountain on earth).

This kind of speed-climbing means a radical change in high-mountain-climbing because expeditions like that usually take place during 3-5 days. To overcome such a giant in a small time window you need total precision and preparation to the smallest detail. The creativity to develop new techniques and the courage to think and act differently is part of this story.

Benedikt Böhm’s presentations include breathtaking images and short video clips with rare takes of the highest mountains of the world. The audience is quickly aware that Böhm is not a nutty extreme athlete, he is a businessman who leads his expeditions as well as his corporation with responsibility which is needed to achieve this kind of success by exact planning.In his presentations he gives answers to questions like :

How do I prepare myself to reach such an utopian goal to climb an 8000 meter high mountain in such a short time without artificial oxygen ?How do I build up an inner ‘momentum’ to overcome the seemingly impossibility and how am I able to calculate the risks the best way ? What part plays speed by minimizing the risk but also patience and flexibility with large projects ? How do we behave under absolute exceptional circumstances? Which part plays fear and courage ? How do I overcome fear on my way to higher goals? What is essential and what is only important respectively what can be cut out? Why means innovation for Böhm primarily ‘easiness’ not only as a mountaineer but also in business matters and maybe even in his private life ? What does it take to find new paths and lead a change successfully and how do we get back to our original attitude after a harsh battering?

Böhm is not an alone mountaineer and describes the uniqueness of the team while being in the death zone but also the immense pressure – with one self as well as with the team – which you have to lead. Again and again Böhm establishes ties like no other from the extreme to the business world.

With pleasure he responds to the desires and needs of his customers. 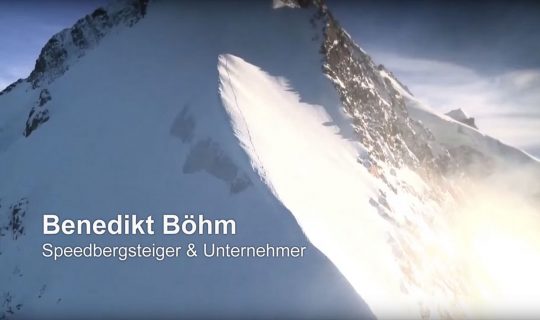 Get a presentation or write an e-mail to Benedikt Böhm.

Here are some opinions of people who have had a presentation.

See a simple summary of companies that had Benedikt tell his experiences.