Nepal, October 2019. Speed mountaineer and DYNAFIT managing director Benedikt “Bene” Böhm climbed Dhaulagiri VII in Nepal on Oct. 15 in new record time. The 42-year-old started his speed ascent from base camp at 4,903 meters (16,086 feet). He only needed 6 hours and 6 minutes to reach the summit at 7,246 m (23,773 feet). Then Böhm skied down from the summit and returned to base camp after a total of 7 hours and 53 minutes. With this new record, Benedikt Böhm broke the goal he set for himself of eight hours with room to spare. The father of three did his speed ascent in the name of a good cause. Before his departure to Nepal Böhm established the campaign “United for Himalayan Kids.” Mountain endurance brand DYNAFIT created a headband speci cally for this cause. It was available for purchase during Böhm’s expedition for the special price of 10 Euro each in the online shop. The sales of the headbands have brought in 7,530 Euro. Together with the Nepal Medical Care Flight Association, this revenue will go to support a school project.

Benedikt Böhm set out for his speed ascent in Nepal on Sept. 26. Dhaulagiri VII, also called Putha Hiunchuli, is the most westerly peak of the long Dhaulagiri Himal mountain chain in Nepal’s northwest. It is recognized as a rewarding mountain for skiing with its 7,246 meters, which is relatively simple to tackle technically speaking. Nevertheless, due to the long approach and its general remoteness, Dhaulagiri VII is still not overrun.

From Dunai, the last point of civilization, Böhm, and his crew reached base camp at 4,903 meters in a total of nine days. After several days of acclimatization Benedikt Böhm started his summit push on Oct. 15 at 4.17 a.m.

“Dhaulagiri VII is a marvelous ski touring mountain with its amazing snowy slopes. The snow conditions were somewhat of a challenge. From icy crusts and icy passages where the wind had blown away much of the snow, we confronted about everything. In addition, it was extremely cold. In combination with the altitude, the nights before the summit push were, of course, relatively uneasy,” Böhm reported. “I have very happy that I was able to hit my goal of eight hours or less. However, this speed ascent de nitively pushed me to my limits physically. But it was worthwhile! A hearty thank-you to everyone who has supported the ‘United for Himalayan Kids’ campaign and has thus given kids access to a good education.”

The sales of the limited-edition headbands brought in a total of 7,530 Euro. One hundred percent of all revenues from the headbands are going to a privately funded school project in Dandaphaya in Humla, one of the poorest regions in Nepal. The Nepal Medical Care Flight Association, with headquarters in Pfronten in Allgäu, has built a school there and continues to operate it with vast amounts of commitment and passion. Now, more than 200 children attend the elementary and secondary school there. An af liated home with medical support for mothers and their children also offers needy families access to urgently needed care. Another school is being built now and will be nished soon. Benedikt Böhm personally delivered the check for the donations to the association in Allgäu, Germany, on Oct. 24.

„When all is said and done, the mind is the decisive factor. And knowing the expedition was all in the name of a good cause, you give a little extra push.“ 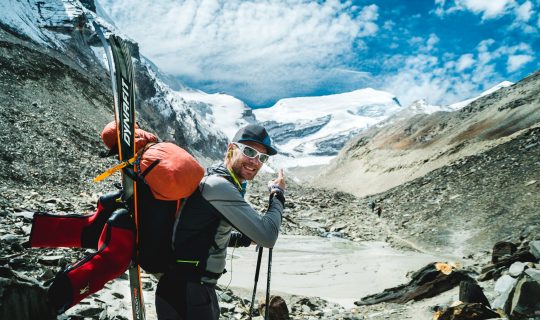